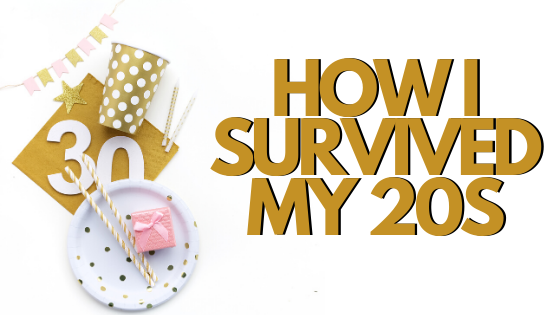 As I approach my 30th birthday on Friday, I’ve been feeling particularly nostalgic about my 20s. This has been a huge decade of growth for me in every way that I could possibly imagine; and while I know this is to be expected for anyone in their 20s, for me it feels different.

Ten years ago, I was in my sophomore year of college. I was a broken, hurt shell of a human being. I found relationships hard, because I had extreme abandonment issues that I hadn’t yet put words behind. I was too intense of a person to build relationships with anyone beyond my little tribe of people. I found it hard to connect and had a bitter and heavy heart. I loved the Lord and knew I wanted to serve Him, but also felt like life had dealt me a crappy hand and that no one understood me. I knew that I was gifted, but nobody had ever really told me that. I covered my body in baggy clothes, because I didn’t want to be seen and yet that was the only thing I wanted.

A few weeks ago, in a phone conversation with my little sister, she said to me, “So Heather. I turn 24 this year. And that puts me in my mid-20s. I’ve never really thought about what it’s like to be in your mid or upper 20s. I mean, I know what it’s like to be young, but mentally I just thought you skipped right from college into your 30s. Do you have any advice for surviving your 20s?”

At first I thought that this was the most ridiculous conversation I could possibly have with my baby sister. She knows I’m turning a whole decade older this year, right? And she’s worried about turning 24? But then I realized that she’s totally right, and many of the conversations I have with my friends and volunteers who are younger than me revolve around surviving this thing called your 20s. You see, I’ve spent the last ten years hearing from people “Oh, to be young again…”

But you know what? Screw that. My 20s were tough. And my sister was turning to the right person. I gave her three points of advice; points that I’d love to share with you:

I’m not against travelling if you have that privilege, and I’m certainly not against taking some time to figure out what you’re good at or what you like. My sister is in that stage right now, and I have mad respect for it.

But at a certain point, you have to find a real job, get real experience, wake up at a real time, and report to a real supervisor for real coaching. And that helps you understand who you are as a person, because you’re learning to manage conflicts and programs and people as you seek to become more than a number, but a person with a career.

And, you know, bonus points for moving and finding who you are in a new city with new people. It is incredibly stretching to start over from scratch.

A former supervisor, who I thought must have had the most perfect family life, once told me “your 20s are about figuring out what happened to you in your childhood.” Therapy is a huge piece of that. No matter what your family life was like, you owe it to yourself to talk about it with a licensed professional who can help you understand your growth barriers.

For me, it was imperative. I began seeing a therapist when I was 27. Originally I thought I was going to therapy because my job wasn’t the happiest at the time. But what I found out during therapy was that I was freaking out because I had fallen in love — and I had some major vulnerability issues as a result of abandonment. Fun stuff.

In addition to therapy, I went on an endless journey of self-discovery. I studied Strengthsfinder and the Enneagram to get a sense of who I am and what my gifts are. For me, this was redeeming. The things that I saw in myself as weakness, I began to see as pieces of God’s image in me. And it was freeing! And it helped me relate better to people who weren’t like me.

3. Date, but don’t feel like you have to settle down.

I didn’t begin dating until I was 24 years old. I was in a new city, and I didn’t know a single person outside of the church I had just started working in.

I dated aggressively, and I did so because I was on a journey to figure out who I was and what I wanted from a partner. I knew I wanted to get married someday, especially since being raised evangelical I had expected to be married and have 2 kids by the time I was 24.

But I’m GLAD that I waited until I had a better grasp of who I was as a person. You are constantly morphing throughout your 20s, which is why so many of my friends who married immediately after Bible college have already separated from their spouse. It takes a lot of time to figure out who you are, and you should never feel like you have to “make it work” with someone when either of you has no clue.

When I met PJ, he was 34 and I was 26. I knew that I valued consistency, integrity, and humor — but a few years prior, I valued height, a high Biblical literacy, and someone who’d lead while I follow (vom). If I had gone with who I thought I wanted, I would end up with a tall tool who used the Bible to place me in the kitchen. I ended up with a partner who taught me the value of teamwork and makes me laugh and loves the Lord but also loves watching me shine. Thanks, Jesus, for that one.

These are the ways I survived my 20s — three simplistic, but difficult methods of finding myself. I am really proud of how far I’ve come: I’ve built deep relationships, including a spouse who I can be authentically and 100% myself with. I don’t live my life angry and bitter, and I’ve learned to wield my righteous anger into a power that gets stuff done for the sake of others. And generally speaking, I am an optimist; when 10 years ago I was a skeptic. I’ve also come to love myself completely. I look in the mirror and I like myself… some would even say my confidence needs to be dialed back. Last, I know what I want to do with my life — professionally but also personally. I can see my goals clearer than ever before.

As I look forward to my 30s, I often hear it’s the best decade of our lives. I hope so. I know that a lot of changes are on the horizon, with more stretching and growth bound to follow . But I also know that I am on a journey to be my best self. And if God can do this much in ten years of my life, who knows what’s ahead?!