Each year for the past four years, I’ve celebrated the Olympics in some way with our students. This year I had help–our high school director and I created some really fun games that our students really enjoyed.

Here I’ll recap the games that we did yesterday, along with the graphics that I made on Canva (you may steal them for yourself!). I”ll also throw it back and re-discover some of the games I did in years’ past. 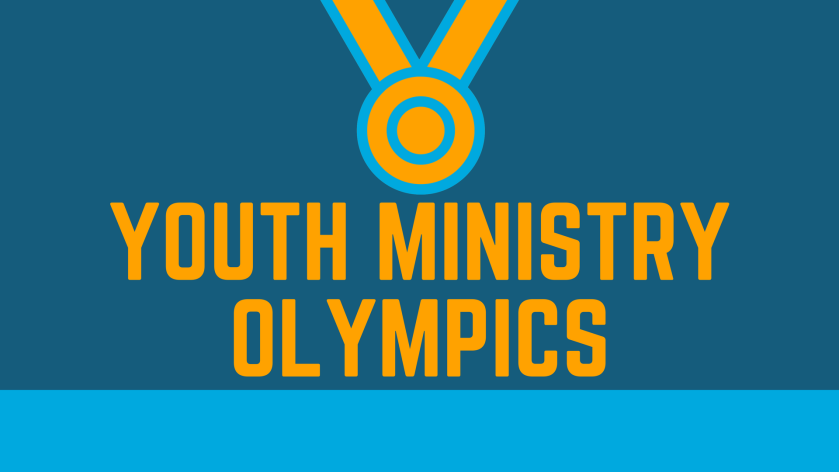 This year we combined all of 5th-12th grade together for our Olympics. We planned our games for 144 participants, to be placed in random teams through paper wristbands at checkin. We gave all of our Adult Leaders pinnies to wear (leftover from another event), and called them our official “Olympics Referees.” As this image flashed on the screen, the Olympic Fanfare played to get students’ attention. We planned for 12 teams of 12, eliminating 3 teams per round. For teams that were eliminated, we had plastic clappers so that they would have something to “play with” to keep them engaged.

Biathlon is a game I’ve never given much thought to, until I realized it’s the most youth-ministry game ever (next to Curling!). We gave each team two shoe boxes–we had several leftover from Operation Christmas Child years ago. We placed tape at the “start line”, then placed Nerf Guns on the other side (two per team to keep the game moving quickly, so that adults had enough time to reload Nerf guns). Students did this relay-style. 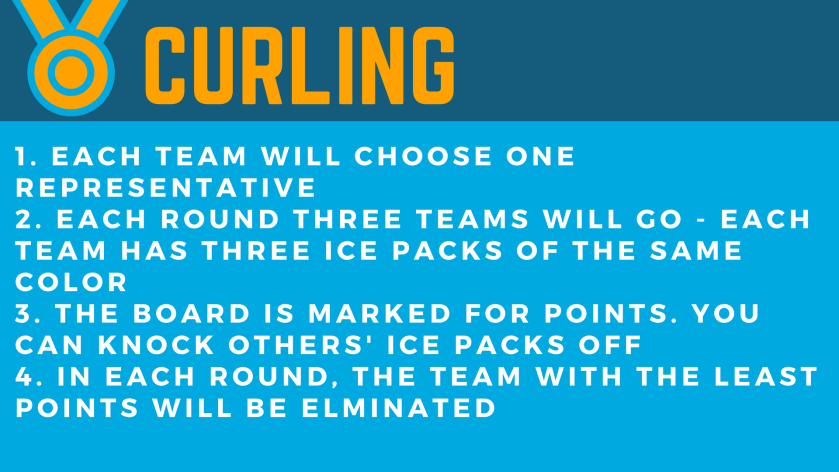 Remember those ice packs you’d get as a kid from the nurse, made from paper towels and zip-lock bags? We made ice packs by making a thick stack of paper towels, wetting them, putting them in baggies, then placing a little more water in them and some food coloring to make three different colors of ice packs. I made a score board with painter’s tape on the table (I’m mad I didn’t get a picture of this!). Three teams went at a time, and the team that has the least points at the end of round is eliminated.

One of my favorite games of all time is a game my good friend Elisa taught me, called “Snot River.” You give the teams two two-by-fours, and they have to figure out how to get their entire team across the river without touching the floor. We gave the two-by-fours to the students and told them that however they could get across, go for it! They just had to remember that the floor is lava/snot/ice and they can’t touch it. We had a time limit, and at the end there were only three teams left, but the team that had the most people across won. We placed them in 1st, 2nd, and 3rd going into the final rounds.

We pre-chose ten songs for the students, and our high school director even made some hilarious videos to go in the back of each of the songs. We chose:

The first place team got to choose their song first, then so on. While teams chose their songs and did their strategies, I played this workout video that I’m obsessed with to get students moving…so they didn’t get bored. Middle schoolers are always bored and demanding that I entertain them. What’s more entertaining than this? 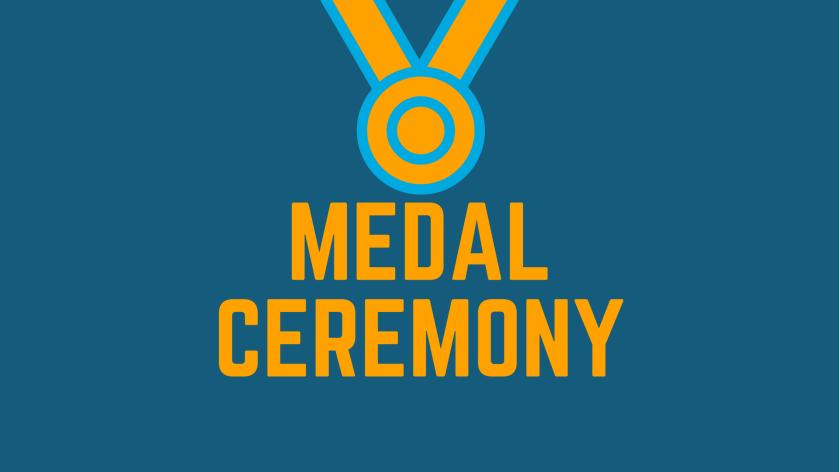 The medals we gave out were pieces of candy on ribbon. Creative, right? Cheapest way to award your participants, and let’s be honest; they’ll throw anything you give them away…but they WILL eat candy.

We did an Olympics “Invite Night” (which is our outreach-ceneterd monthly event). One of my favorite pieces of the evening was the Taco Bell Olympics games that we did up-front with students. Purchase that here–I highly recommend it! The games included:

We gave students stations that represented some games you might play at the summer games:

Shout to Hebrews 12 on “running the race” as your lesson theme. You are welcome. We also had inflatable globes that students could hit during worship, and hung flags around our chapel.

My games get less clever as we throw it back further and further. This year I did Hockey and Ice Skating, and they were a hit! But we ALSO had:

Field Curling–There’s one hula hoop in the center, and each team gets three frisbees. One team member from each team takes turns throwing their frisbee. Whoever is closest wins their round. Whoever has most round wins gets the medal!

Medal Hunt — fill a kiddie pool with Orbeez and plastic medals. Place up to 4 people around the pool. Put one minute on the clock. The kid who collects the most medals using their feet wins! Hint: do this outside. It took us a while to clean this up from the retreat center we were at!

There is so much more that I could say about how to incorporate the Olympics into student ministry. It’s such an easy win to do the games in some way each time it rolls around. For us, each year has been different: This year, on a Sunday morning; two years ago, at a special event; four years ago, as a part of a retreat weekend. It’s an awesome way to get students interacting on teams and relating a sport that should be appreciated to their own story.

I encourage you to consult Pinterest for more–there are lots more games, snack ideas, and cool ways to customize the Olympics, no matter the size group your have