I’ve been going through a salty season…“salty” meaning that I’ve been very irritated, angry, and negative.

And since my entire life is wrapped up in the church–it would therefore make sense that some of this hurt has impacted the way I view that, as well.

But Holy Week healed me.

On the Tuesday of the week, I did the Stations of the Cross. As I walked the Labyrinth, I realized it might be the worst prayer practice possible for me. I simply cannot keep my thoughts unclouded for that long of a period of time. Especially since I spent the entire Labyrinth telling God everyone I was mad at.

I kept trying to calm myself down. And when I got to the end of the Labyrinth, I told myself to quit being angry.

Good luck with that, Heather.

Maundy Thursday is my favorite day on the liturgical calendar. This is the one day of the year that I feel completely immersed in the narrative of scripture–we wash one another’s feet and take Communion around a table together just as Jesus did the night before he was betrayed. It’s magical.

Last year I volunteered at my first Maundy Thursday ever by washing feet. The first person whose feet I washed was our senior pastor’s. I remember shaking.

A few people later I washed the feet of a man who is high in leadership at the church, who is one of the manliest yet most thoughtful people I know. He cried. He told me the last person who washed his feet was his daughter, who was in college. His youngest was a month away from moving as well. He wiped his tears on me and moved on.

A few people later a woman I didn’t know asked me my name after I washed her feet. Then she asked to wash my feet…as I wept. Her act of humility blew me away.

This year I chose not to wash feet. I’ve had such a busy year at church that I wanted to attend the service and allow myself to be served. This was kind of a big deal for me, because I’m not always great at saying “no” and allowing myself margin to rest.

But God showed up and did some cool things.

I went to have my feet washed, and the person who washed my feet was the mother of a student who I have an ongoing struggle with. I had to talk to him and his mom a few weeks ago about his behavior issues after he attempted to humiliate me in front of the group. After talking to her, I was softened for probably the first time to consider that there was more going on than I understood. It’s really humbling to realize that the people hurting you are hurting themselves, and I haven’t stopped thinking about their family. Having his mother serve me, when I couldn’t even figure out how to serve her was so humbling.

I sat down in my pew, waiting for my row’s turn to do Communion. I grinned ear-to-ear, weeping because of the view. I saw Small Group Leaders washing their students’ feet, unplanned. I saw students taking Communion around the tables together, awkward yet lovely. I saw pastors beaming as they shared this moment with the congregants.

I sat down to take Communion with a group of people–some who I knew, some who I didn’t. It was so awkward for us to do Communion around the table, but we all knew it was special because it was like the Last Supper. As they fumbled, taking their bread out of turn or spilling the juice, everyone began apologizing. Apologizing for communally doing Communion in community.

I spoke up. Classic Heather. Am I allowed to chat during Communion?

Nobody responded to me. They just nodded (great for my self-esteem). But I passed the cup to a man who passed the cup to his son, one of my favorite 7th grade boys. In fact, he may be in my top 10 favorite students I’ve ever had. Not that I’m keeping track.

This boy dipped his bread into the cup. Then he decided he took too much juice. So he wrung his bread back in. Then we all laughed way too hard as we popped our bread into our mouth, gasping for air.

As I went back to my seat, trying not to laugh anymore, I waited. I was towards the front of the church, so I had another 20 minutes of reflection as everyone else took Communion.

It was time needed. We sang, “I’m watching, I’m waiting” as a chorus for a few minutes, which reminded me that this was why I’m here. I was here to watch. To wait. To be served.

As I watched, I watched a lot of people I was “salty” towards also receive Communion.

Have you ever watched someone you’re mad at receive the Body of Christ?

Maundy Thursday reminds me that just as the student’s bread wrung out the juice, so was Christ’s blood poured out for us.

Both are unsettling thoughts. Kind of gross (and one unsanitary).

But God is big enough to handle all of this.

And in that moment, I was forgiven for being salty. And I forgave those who I had been struggling with all week.

But alas, on Good Friday, I was back to being a salty person (I know, I can’t help it).

Our Good Friday service walks you through Jesus’ last 7 statements. With each statement, the lights get dimmer to reflect the darkness entering the world as Jesus was crucified.

But as the room got darker, the stained-glass cross got brighter. I think God makes the sun set this way on purpose. 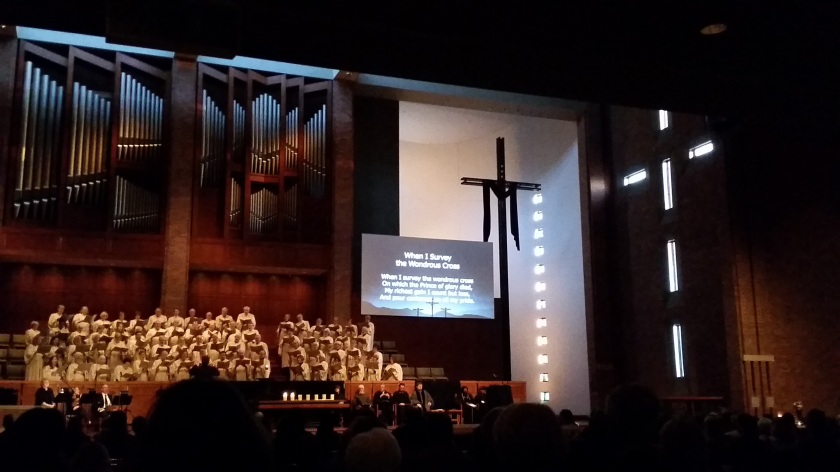 You already know where I’m going with this, right?

As the room grows darker, the cross shines brighter.

When my heart is the darkest, the cross is the brightest. At this moment my sin of irreconcilable anger was highlighted, and I earnestly repented.

It has been two weeks since Holy Week. God and I are still wrestling through some things, of course.

But every time I see someone I’m salty with, I’m reminded they receive the same Communion.

Every time I get frustrated, I remember how bright the light of Jesus is.

Every time I feel like I’m lost in a labyrinth with my anxious thoughts, I’m reminded that there is one way out and I can’t get lost.

This post may sound like a mixture of my random thoughts and experiences, but God really healed me of some things. Holy Week did its job (even though I failed at giving things up for Lent).

Holy Week brought me out of the wilderness and to the cross.